15 Vending Machines in a Row? 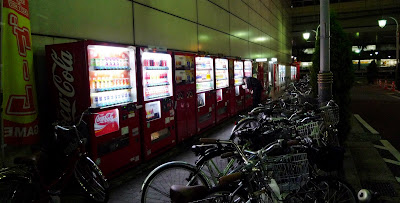 It's not uncommon to see 4-5 machines lined up in a row in Japan. I don't know the logic of it, except that maybe when there's more machines, there's more choice, so more people tend to gravitate towards it, versus having a solitary machine by itself offering less choice?

Anyway, in Sunshine City, there's this alley that has 15 vending machines in a row. There are so many that I can't really take a singular shot of it, but here's the link on Google Maps. Just scroll across and see all the machines!! Insane or what?

You can see also that most vending machines have their own recycling units, so you don't have pop cans littered everywhere. Also, in Japan, it's considered rude to eat and drink in public, especially if you're walking, so many will buy a drink in front of a machine, drink quickly, and then immediately recycle the can....... very honourable...... but 15 machines in a row? Really?