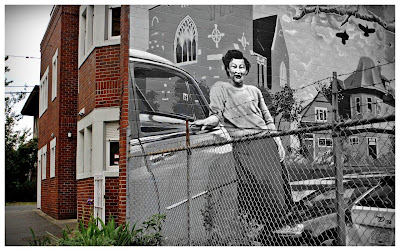 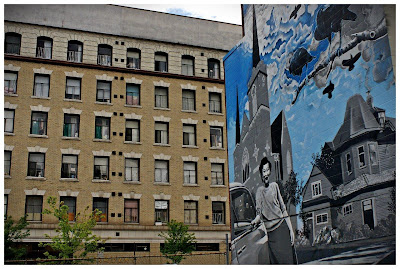 Another spectacular mural in the Strathcona areas of Vancouver.  This one stood out because of the black-and-white with  blue sky colour scheme, as well as the fact that the woman in the mural is Asian.  After doing some research, I found out that Mrs.Lowe is the name of the woman, and her daughter Vanessa, an artist, still lives in the building and contributed to the mural.  Click here to find out more information about the mural, the artists, the original picture that the mural is based on, and an unobstructed view of the entire image.

As for my pictures, it was hard to get a straight on shot because the side of the building itself is fenced in, and all along in front of the mural is parked cars.  So I took some shots along the outside of the fence, as well as from within the parking lot, trying to find unique angles.

The top image I decided to monochrome the entire mural so as to simplify the busy fence and parked cars. Notice how it looks like she's looking over the fence? The second image, I cropped out the vehicles along the bottom and changed the angle of the image to line up to the building across the street.

Thanks to Vincent Dumoulin, Vanessa Lowe & RestART for the Crow Highway Mural!!