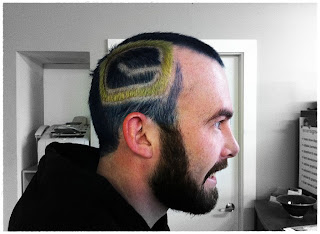 Hockey fever is high in Vancouver as the Vancouver Canucks are in the Stanley Cup finals against the Boston Bruins. One of my customers came in with this hairdo this morning, a day after Canuck's 1-0 game one win the night before. Sean was at the game ($1300 for a pair!!) with this haircut and said he had lots of random peeps taking pictures of his head.

I like his intense expression and how his hoodie makes his head look like it's extended forward and ready to attack, like a wild animal (or a crazy Canuck!)

I wonder if he'll do something similar for the Vancouver Whitecaps FC if they make the MLS finals?!?! Go Canucks Go!!

P.S. Canuck is a slang term for a Canadian, typically only used by Canadians to refer to themselves or to a fellow Canadian. Most American's have no idea what a Canuck is. They think it's a First Nations term, or a type of bird, a fish, a plant, etc.

Taken with my iPhone 4.