It's a pretty awesome little camera... and yes, it is significantly (or at least noticeably) smaller in the hands than the X-T1. It actually feels like a 'pro' M43 cameras (like the OMD or GH series cameras by Olympus and Panasonic), but with a larger APS-C size sensor. The EVF is also smaller than the X-T1, but nobody expected Fuji to put the flagship mirrorless EVF into the smaller, cheaper X-T10. The view through the EVF is very similar to the X-E2, so it is adequate (I'm partial to OVFs). Shooting with it was weird because it looks like the X-T1, but once you start shooting with it, the X-T10 has its own unique shooting 'feel'. The size, the weight, the dial and button positions; everything feels familiar but different. If you've been shooting with Fuji X series cameras for a while, you'll quickly and easily feel right at home with the X-T10.


The question on most people's minds is this: is it better than the X-T1? Technically, at the time of release, the X-T10 will have a more advanced AF system than its big brother (although the X-T1 will be getting firmware update V4.0 that will equal the X-T10). However, a multi-zone (77) autofocus system with eye control won't be such a major feature for many street photographers, like myself. What stand out features does the X-T10 have? Let's do a quick run down on what I liked about the X-T10 over the X-T1: 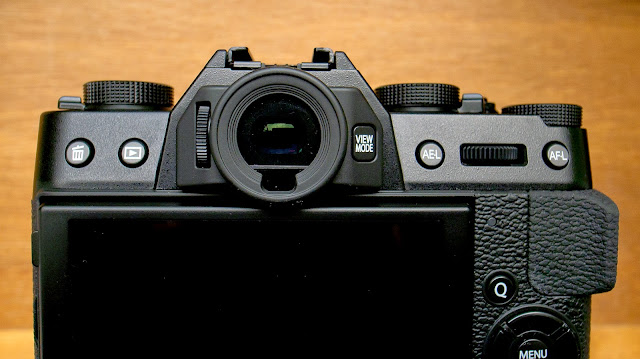 For a $600 price difference in Canada (even more for the Graphite Silver edition) the X-T10 is an amazing deal for anyone looking to getting into a high performance DSLR replacement mirrorless camera. If you're coming from pro-body Canon and Nikon DSLRs, perhaps you'll be more comfortable with the solid feel and weather sealed body design of the X-T1; but the X-T10's price-performance value is hard to ignore. Did Fujifilm make this camera too good? Perhaps.

Now the bigger question for people is comparing it with the similar price point X-E2. Fujfilm USA and Canada have recently dropped the price of the 2 year old body by $100, but is that enough to keep it competitive with the X-T10? Let's run down the list of features that the X-T10 has over the X-E2: 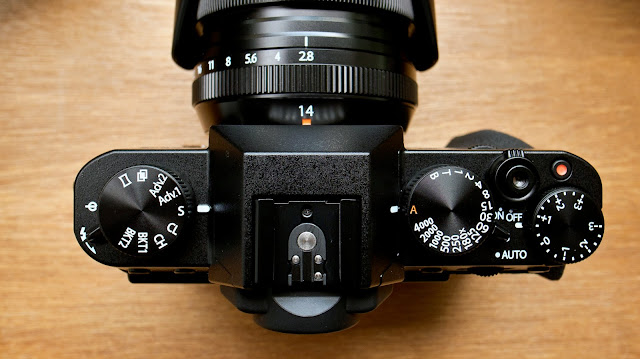 X-T10 Pros over the X-E2
Other than size, weight and rangefinder style shooting, there isn't a whole lot that the X-E2 has over the new X-T10. At only $100 cheaper, I think the X-E2 is in serious trouble, unless they give the firmware a serious overhaul (similar to X-T1's future V4.0 update).

There's one feature that I know everyone is going to be talking about and other reviewers are going to test out, which is the new 'super-fast, intelligent hybrid Auto Focus with eye detection'. It has 49 single points (same as the X-T1 and X-E2) but with selectable 77 zone auto focus areas. You can choose the grid size and shape (7x7, 3x3 5x3 5x5) from 77 areas on a 11 x 7 grid to accommodate wide or tracking AF. Wowzers!!

The pre-production model did not have the eye sensor option enabled (the firmware was not finalized) but it did have the wide predictive AF grid. It did a decent job of predicting movement, but it still tended to pick the object with the most contrast or the most movement. Moreover, if I was shooting sports, or fast action, or kids running around, perhaps it would be a big deal. For me, I find the most accurate AF is single spot, reasonable DOF and timing. I'm not really the right reviewer to test this feature, but it seems zippy and fast enough. It also has 8 fps continuous shooting (like the X-T1) but with predictive AF. There will be a firmware update to allow the X-T1 to 'catch up' to the X-T10 with this new AF feature (version 4.0), so technically speaking the performance on the X-T10 in this area will be temporarily superior.

This is not to say that the X-T1 doesn't have a few tricks up its sleeve. It has a faster card write speed and thus can shoot 8 fps in burst mode up to 47 frames (with a high speed card). It's a weather sealed body to keep dust, moisture and splashes away from the vital internals. It has the optional vertical control grip with battery pack for more versatile shooting positions and longer battery life. It has the biggest EVF of any currently available camera (not just best-in-class) with 0.77x magnification (vs 0.62x on X-T10) and the ability to have a mini secondary EVF in screen. Yes, the X-T1 is a serious image-making machine and I really love shooting with it... but so is the X-T10. 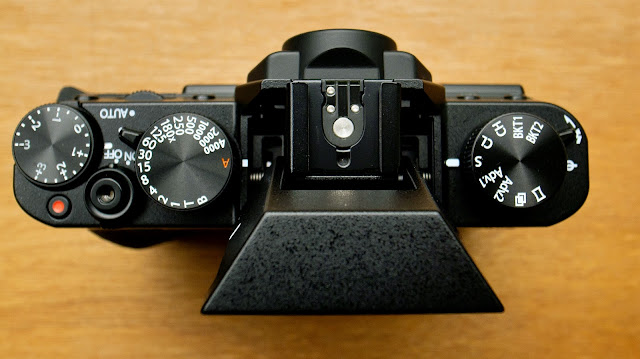 So where does the X-E2 fit in all of this? It was announced in October of 2013 and I reviewed it in December of that year. It's been a long 18 months since its release and a lot has changed since then. Yes it had firmware update V3.0 back in December, but there doesn't seem to be another one that coincides with the X-T1's recent firmware update V3.10 and V3.11 and upcoming V4.0. Is this the end of the X-E2? My guess is that Fujifilm will continue to make firmware updates (the X-Pro 1 even had V3.40 back in December) but nothing that will add radical updates to its current performance. Fujifilm has recently reduced the price of the X-E2 by $100, but is this enough of a savings to convince someone from not buying the X-T10? I don't think so. For an extra $100 you get an articulating screen, extra control dials and buttons, faster and more accurate autofocus, faster continuous shooting speeds, and a newer, fresher design (this is subjective of course because the X-E2 is still a beautiful looking rangefinder style body). For only a $100 difference, there's no point. For a $200 difference, then maybe.


Because I have a pre-production model, I can't post any of the pictures I took with the X-T10. However, since it's the same sensor as the X-T1, X-E2 and X-100T, you're basically getting the same great image quality. For my own personal viewing I checked out the images on my computer and I can confirm they look EXACTLY the same as the other X series cameras, which is a good thing. If you own the X-E2, you're not upgrading for better pictures, just more features and improved ergonomics and functionality. If you own the X-T1 and want a second back-up body, you're really going to notice the smaller size and weight, but also improved button and dial feel, including the threaded shutter button that you can add a threaded button for improved leverage and feel. If you're new to the X system, I would highly recommend the X-T10 to be your first introduction to Fujifilm's amazing ILC system, unless you really need the extra bells and whistles of the X-T1.

Last year I recommended to Fuji to release a non-weather sealed version of the X-T1, but this is way better. A regular non-sealed X-T1 would have been the same price or maybe $100 cheaper than the current X-T1. The new X-T10 is a full $600 CDN cheaper (or around $500 USD) but maybe only a 10-15% performance-feature loss. That's serious performance value in favour of the X-T10. An extra bonus is that you can get the silver X-T10 without paying a premium, unlike the X-T1 Graphite Silver Edition ($200 extra, although technically it's not just silver, but 'graphite silver').

I will be receiving a full production model in the next few weeks and I will really put the camera to the test. I also have the new XF16mm f/1.4 WR lens, but I like the balance of the XF14mm f/2.8 on the X-T10. I'll test both lenses and let you know soon how it feels while out shooting on the streets. Both lenses are great so it's a matter of shooting style and taste, and both shoot equally well on the X-T10, as does the standard XF18-55mm zoom lens. Please check out my short and long preview of the X-T10 on YouTube and watch for additional pictures on my Instagram account, Twitter, and also FujiLove.

Check out my quick preview of the X-T10 on YouTube here!!

Check out my full 20 min preview and comparison HERE!